Six to eight people working for two months were able to completely built the house.

The finishing touch was a notched pole leaned up against the raised floor: this is used as a stair leading to the house's only door. 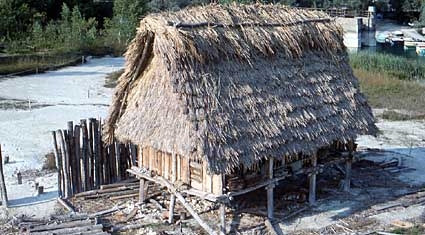 Experimental reconstruction of a neolithic house at Chalain.

The result: a sturdy house that for 11 years stood up to rain, snowfall, gusts of wind and floods.

In its twelfth year, the house collapsed on its side when the load-bearing posts rotted through at ground level. Indeed, dendrochronological analysis has shown that the average life-span for these houses on stilts was eight to twelve years.