In 1991, the discovery—in the mountains between Italy and Austria—of the frozen body of a man from the end of the 4th millennium completely overturned our ideas about Neolithic clothing. Just like the inhabitants of Chalain, Ötzi (as the man was nicknamed) was wearing a rain cape and a hat made from woven tow. The strands of tow were tied together inside in imitation of an animal pelt. Deerskin—known for its fineness and flexibility—was used for his shoes, belt and vest. 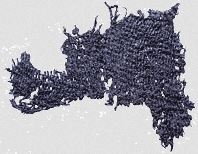 Fragment of tow-weaving
made from linden fibers.

As a mark of social standing, beads and pendants were made locally, aside from several rare objects from far away that arrived through exchange. The most commonly-found objects are circular or cylindrical beads with grooves made out of deer antler, small bones of carnivores, wolf, wild cat and dog are the most commun. 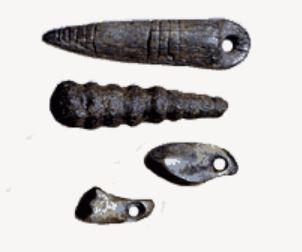 Pendants made of perforated deer antler.

These necklaces are often found in waste areas. Thus, these are not rare objects that are passed down, but more likely temporary status markers in which symbols of men and hunting are clearly visible.