Dendrochronology is concerned with the study and measurement of the growth rings that form each year in trees. The number of rings in a tree allows us to measure its age, and the thickness of the rings tells us about its growth conditions and changes in the immediate environment.

Using a computerized optical system, measurements as small as a hundredth of a millimeter can be taken. The resulting data are then expressed in graphic form, with time on the x-axis and the width of the rings on the y-axis. In order to date a wooden structure, measurements must be taken from several samples, as good results are obtained from their statistical mean. The graph is then compared to a reference graph corresponding to wood for which the age is already known, starting for the present and going back in time.

Dendrochronology at Chalain and Clairvaux

At both Chalain and Clairvaux, the large number of wooden posts and horizontal beams means that development of the village communities can be precisely followed in 10 to 20-year increments, from 3,500 to 2,900 BCE. In addition, research into the successive phases of tree felling and the system for supplying villages with wood has allowed archaeologists to explore issues of environmental management and population density. 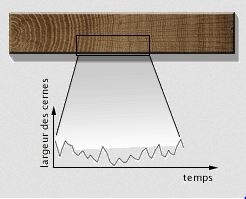 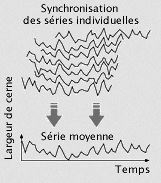 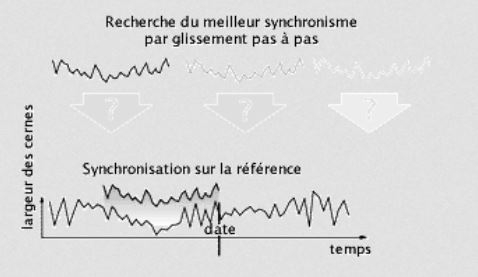 Plot of a wood sample.

Comparison with the reference.