The study of seeds

Carpology is the study of the remains of seeds and fruits preserved in an archaeological context; most often, these correspond to waste discarded by people in the course of their activities. At Chalain and Clairvaux, the wet environment in which they were buried has helped preserve these fragile organic remains.

Thus, botanical identification of remains discovered in trash pits and waste areas of the houses gives us information about the eating habits and agricultural practices of the Neolithic populations. For example, the presence of achenes in human excrement clearly demonstrates that small fruit such as strawberries, blackberries and raspberries were gathered and eaten on the spot.

In addition, the study of cereal grains tells us about what varieties were cultivated, while remains of weeds harvested at the same time allows us to explore agricultural techniques. 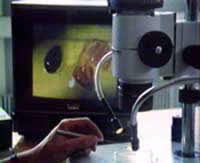