At Chalain 19, areas for cooking on heated stones are fairly common.

However, one of the village's two biggest cooking structures is located in front of the isolated house. It is made of large stones and morainic rocks that have been cracked and broken by the heat. The most plausible explanation of these large number of burnt stones is that these areas were used for the collective cooking of large pieces of meat in the context of highly ritualized feasts. 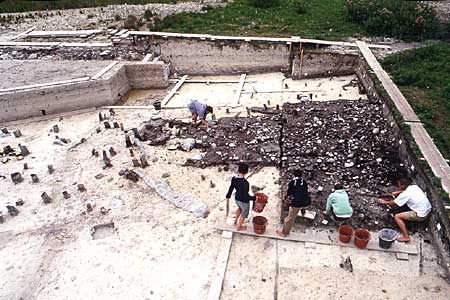 The isolated house and its structure of cooking stones.

If this was the case, the isolated house in Chalain 19 stands out once more by the quantity and size of these cooking stones. It should come as no surprise that in the late 4th millennium offerings of meat—and game meat in particular—were used to reinforce social inequality, just as the development of deer hunting did. Representations of the deer, a mythical animal, appear at this time on the sacred stones and steles of the Val Camonica.