At Chalain, the first clue is given by the topographic location of certain villages that were built on small peninsulas. Often formed with the ruins of previous villages, these settlements offered unquestionable defensive advantages.

Thus it appears that villages built next to a lake have natural defenses on three sides. When they are built on wetlands, the surrounding soft and spongy ground makes access to the village difficult.

If we look at other types of Neolithic sites, we can see that defense is a constant preoccupation. Why would it be any different for our lakeshore villages?

A second clue that supports this theory can be found in the way that many villages were laid out. First, to access the village from dry land one followed a narrow, straight path, using a wooden trackway for crossing the wetland zone. Then, a strong palisade—often made from split oak logs—allowed visitors to be screened at the entrance to the village. It is not by accident that the length of these wooden trackways, which is rarely under sixty meters, is more or less equivalent to the range of an arrow.

Consequently, it seems certain that it was the defensive nature of the site which led to the construction of villages on lacustrine soil.

In addition, if we look at existing lacustrine sites in other countries and cultures, we see that defense is always a preeminent concern. 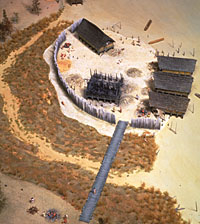 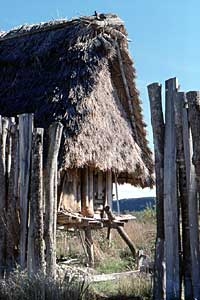 Chalain, view of the experimental house, seen through the entrance in the palisade.