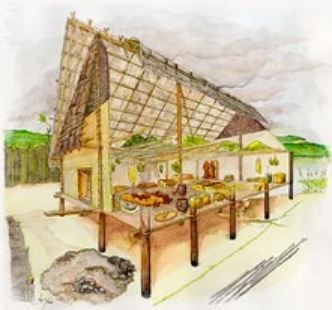 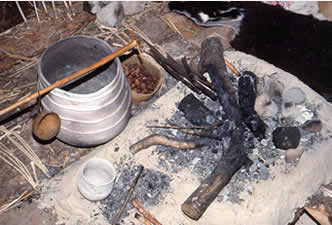 Location of the hearth.

Reconstitution of a 30th century BC hearth.

Next to the hearth, we can see a pile of shingle or pebbles as a big fist. Made of limestone, these stones were meant to be heated in the fire in order to cook meat, flat cakes or bread.

One or two terracotta jars were used for cooking. These thick-walled yet fragile containers were used for boiling vegetables, meat or fish. Simple and plain, the jars were not meant to be transported or used on public occasions: there is nothing either festive or ceremonial about this 30th century BC kitchen.

The stirrer of beater is a tool that is always found in culinary contexts. It is easily made with the tip of a whitefir tree that grows above 800 meters, higher than Chalain.

The plain appearance of heavy, fragile ceramic pots, used for cooking food, is offset by the use of wooden ladles, bowls, cups and plates for eating.

These containers, first hacked into rough shape with an axe and then shaped with tools, were made out of irregularly-grained woods, chosen for their resistance to drying and temperature fluctuations. This type of wood was found in gnarls, whose frequent use in eating materials suggests that they were systematically sought in the forest.