Not fishing at all?

Several Neolithic pirogues made of oak have been found at Chalain. These dugout canoes, i.e. made from a single hollowed-out tree trunk, are round-bottomed and sometimes have separate interior compartments. They look like this toy made from hazelnut wood found in a 30th century dwelling. In addition, a paddle with rectangular blade was found at another site.

But these pirogues were few in number, one or two per village.

They could very well have been used for transporting heavy loads instead of beeing used for fishing.

Scale model of a pirogue.

There have been few discoveries of fishing equipment at Chalain and Clairvaux. Net floats made from poplar bark have been found, as well as weights made from small limestone piece wrapped in birch bark and tied at each end. Such weights seem to suggest nets that were set in place, rather than cast or towed. 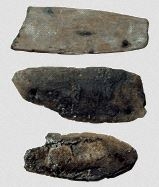 Net weights made of birch bark.

Net floats made of poplar bark.

And not many fish bones…

Despite the dozens of cubic meters of archaeological sediment that has been meticulously sifted through, fish bones are rare occurrences in villages and waste areas. There are a few dozen instances, not more, and these are exclusively from trout, not the freshwater fish that are found today in these lakes.