The once-popular hypothesis of veritable "pile-dwellings" built out in the water is now outmoded.

It is in contradiction with the realities of the terrain, but it gave birth to a rich iconography in late 19th century publications, which emphasized the continuity of traditional national values, particularly in Switzerland.

This type of reconstruction tells us more about the social and cultural assumptions of the authors than it does about the daily life and social organization during the Neolithic.

Today, we are probably not doing much better at escaping the imagery of primitive life that our own civilization cherishes when we attempt to offer a visit to a Neolithic house. But archaeological data has been accumulating for a century, and has profoundly changed our point of view: archaeology is always being rewritten. 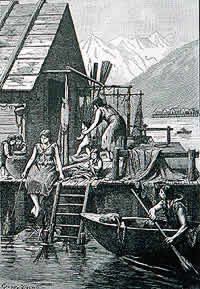 Experimental reconstruction of a Neolithic house at Chalain.