What about the dead ?

Bones, but no graves

Currently, there are no graves associated with these lakeshore Neolithic villages.

However, this is the case with practically all the wetland villages northwest of the Alps. The dominant theory is that most of the dead were not buried.

Several bones kept in memory of the deceased

If we examine the domestic waste areas near the houses or along the palisades, we find a few unconnected bones. At Chalain and Clairvaux, there are hardly more than a dozen human bones in all. These include several isolated skulls, one or two mandibles, a few vertebrae and long bones, and one skull fragment that was cut, polished and pierced in order to make a pendant.

We are not dealing here with a normal funerary ritual in which the dead were left on the ground within the boundary of the village. Rather this is a selection of several anatomical pieces kept in the house in temporary memory of a particular person. Neither age nor sex determined the choice of bones.

One case should be pointed out; at Chalain 19, just above the layer of abandonment of the village in the 30th century BCE, the body of a child was laid on the wooden trackway at the entryway in the palisade.

The body, laying on its left side in fetal position, was covered with a hide that was fastened to the ground to keep the body in place during period of flooding. This is an isolated case. Was it a possible ritual for enclosing the village space? The theory cannot really be defended. 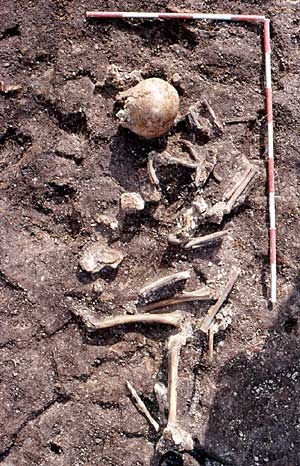 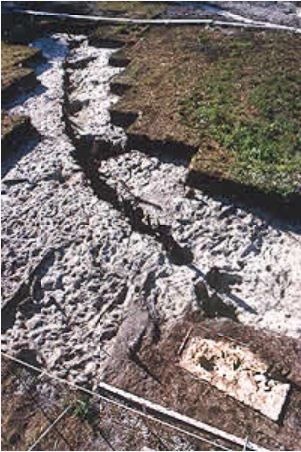 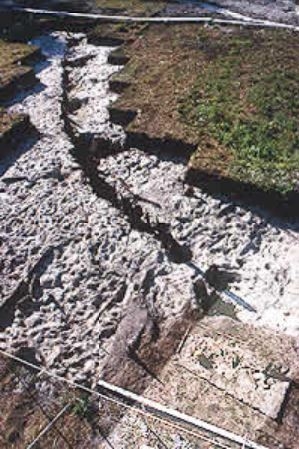 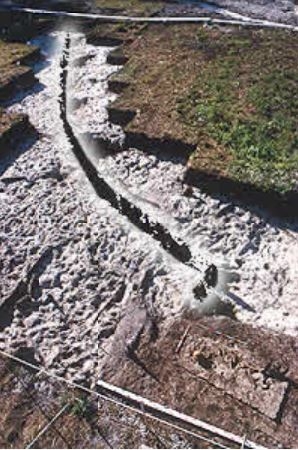 Skeleton of a child.

Location of the Skeleton of a child.

Location of the wooden trackway.

Location of the palisade.