In organic deposits consisting of beds of vegetal layers, twigs and wooden architectural elements, a particularly delicate approach to items made from wood or bark is necessary. In these cases, the emphasis must be placed on the object to be removed, and not the various vegetal elements, which can only be sampled.

Here, the abundance of organic material means that choices must be made—and continuously re-examined—and a selective sampling carried out. In a way, this means that for those habitations where the conditions of preservation are extraordinary, only a handful among these millions of witnesses can be called to testify—witnesses that "dry land" archaeologists search for so desperately. 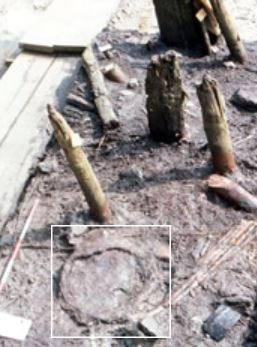 Fishing net weights made from fragments of limestone wrapped in birch bark.

It is not particularly difficult to remove very fragile objects once they have been identified. The risk is that the objects, and archaeological wood as well, will be destroyed by the use of the trowel if an archaeologist insists on creating visually pleasing layers, without regard for natural fluctuations in the sediment.

Clairvaux was our first experience with archaeology in a wet environment, and we needed four excavation seasons before we were able to find the first wooden artifacts without damaging them. This was how long it took to understand that it is often best, the moment one has come in contact with a very fragile object, to put down the trowel and to continue using hands and fingers. Such a method does not rule out the possibility of working meticulously.

Once it is exposed to the air, the object will deteriorate very quickly: now comes the problem of its removal and long-term preservation. The threat of decay is also problematic when archaeologists want to uncover large groups of objects in order to study their relationships in situ.

The Chalain 3 site is a rare example in which the raised-floor houses collapsed on top of a habitation layer. There are an unbelievable number of well-preserved architectural elements. To try and understand the relationships between the construction wood and the habitation layer, we decided to excavate the occupation layer while leaving the wood in place. With more than a thousand architectural pieces to preserve for two months in barely 160 sq. meters, it immediately became clear that the vestiges would have to be kept wet and covered with a thin plastic film in order to keep them from quickly drying out in the air and sun.

There was no choice but to unwrap the pieces of wood before each set of photographs and to spend one or two hours wrapping them up again. This was the price to pay in order to visually understand how the architectural pieces fit together and to tell apart the parallel planking used for the lanes and the long boards used in the bordering houses. But the distribution of more classical archaeological elements suffered: their location was accurate only to within a square meter. 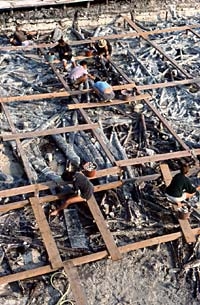 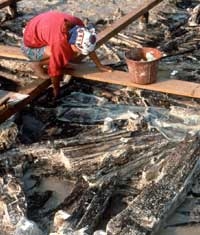 The woods are covered with a plastic film to keep them in a humid environment.

Because of the difficulties inherent in conducting an archaeological excavation in a wet environment, it is often crucial to sift sediment in order to take samples of the sediment itself and the organic material, which contains items such as seeds and woodworking waste. This is a time-consuming technique, and the right balance must be found between the speed of the excavation and sampling through sifting.

When starting to excavate in a wet environment, it is always difficult to have to throw away certain archaeological finds (seeds, moss, bark, twigs, etc.), whose state of conservation catches one's eye and stimulates one's interest. However, a solid theoretical framework and good, reasoned sampling is often more worthwhile than sifting everything with the over-optimistic goal of accumulating often unusable data. 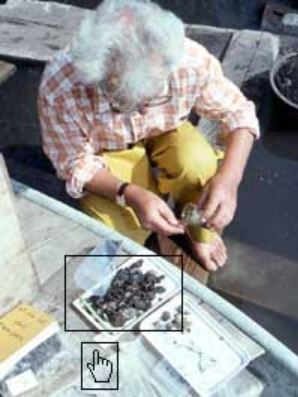 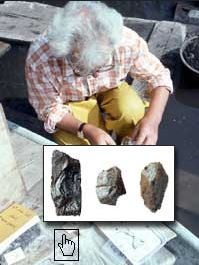 The usefulness of architectural wood

A great deal of attention has always been paid to house pilings. Those made of oak and ash can often be dated using dendrochronology.

The problem is not a simple one, however, because there is practically no correlation between the vertical posts (visible just beneath the water when it is at its lowest level) and the horizontal archaeological layers. Dating the habitations themselves is thus entirely based on the examination of the horizontal parts and shavings, whose growth rings may possibly correlate with the dendrochronological means established from the posts. This is the essential condition for establishing real absolute dates as reference points in connection with the archaeological data.

The preservation of vestiges made of perishable materials

We should not underestimate the very real problems connected with the removal and long-term preservation of archaeological material once it leaves its waterlogged setting and is exposed to air. The excellent state of preservation is because the aquatic environment has slowed the decay of the most fragile objects. Excavating them suddenly interrupts this very long-term stability and the process of decay accelerates. The artifacts must be kept in water, then stabilized in the laboratory by replacing the water inside the object with a product that hardens and prevents it from warping as it dries. There is still much progress to be made in this domain, as well as in consolidating large boxed samples and in the long-term treatment for the thousands of tools made of antler, which also suffer from the abrupt passage from water to air. 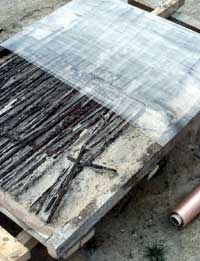 Boxing and protecting a section of hazelwood wattling with plastic wrap.