The deer was the favorite species to hunt; it yielded the largest quantity of meat as well as a thin, supple and resistant hide that was used for clothing.

Entire herds of deer were hunted indiscriminately. When winter came, the badger was also prized for its meat that was high in fat.

In addition to the wild boar and the roe, hunters often traveled very far, into the shadows of the primeval forest, in search of aurochs with their large horns.

The horse, which is a forest wild animal, is often present in hunting paintings from the end of the 3rd millennium. It was also probably depicted on the handles of large ceremonial bowls. We may consider that its status, as well as that of the deer, held a very special place in the collective imagination. It is even interesting to speculate whether the horse was purposefully introduced into the region from herds of wild horses in the forests of southwest Germany. 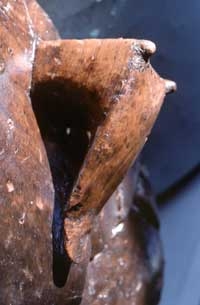