The classic techniques of aerial prospecting can be useful for locating the position of some lakeshore villages. However, the traces to look for from the air are different: they are, above all, plant material growing directly out of old construction posts or Neolithic waste areas, which are still quite rich in nitrates and organic material.

What aerial photography misses, however, are ancient habitations located deeper down, under the soil or in the lake, where thick layers of lake marl discourage the development of a network of deep roots. Aerial prospecting also misses sites that are eroded (and which are of great interest for dendrochronologists), where only wooden foundations remain.
To learn more: Aerial archaeology in northern France (in French only) 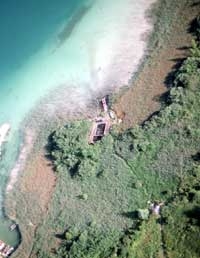 Excellent results have been obtained by systematically prospecting the drainage of bogs and marshes. At Clairvaux, six Neolithic villages have been located simply by observing, over a period of ten years, the works in progress along the drainage network of the watery zones around the lake.

Prospecting becomes more difficult for some archaeological sites that are no longer in primary position: artificially lowering the lake's water level has caused them to slide into the lake. At Chalain, enormous blocks of marl have moved more than 200 meters and are now 15 to 20 meters underwater. Visibility at this depth rarely exceeds one meter, making working conditions less than ideal. Five Neolithic and Bronze Age sites have been found at Chalain, at a depth of between 8 and 20 meters below low-water level. 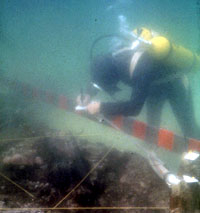 Section of archeological sediment that has collapsed into the lake.
Chalain 21, 27th century BCE.

In these underwater environments where the sediment is still soft, remarkable results have been obtained using a drill at depths of up to 8-10 meters. Successive stratifications and non-eroded habitation sites can thus be studied. The technique also has the advantage of being easy to use. It does not damage the sites, because it has no effect on the water table (unlike opening trenches with a steam shovel).
Finally, augering fits perfectly into a program of preliminary analyses (including dating and evolution of the natural setting) because the layers of sediment in the core sample remain unmixed.
The future of wetlands research will certainly include the development of systematic probes using augers, which can be used to make an overall assessment in just a few months. 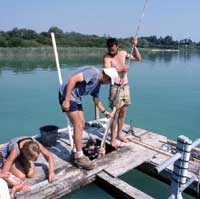 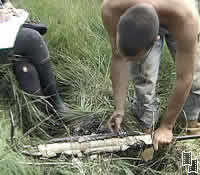 Taking core samples from a pontoon.

Stratigraphic cross-section based on boring for core samples.
Source: A. Visseyrias.