After a global evaluation of the sediment structure, excavation techniques must be adapted to the complexities of anthropic deposits.

At Clairvaux, La Motte-aux-Magnins is an extremely complex site. Located on a peninsula, it was home to Neolithic cultivators for nearly two thousand years. Villages were built one after another, systematically using nearly the same plan, and the abandonment layers reveal almost no natural deposits.

This gap in the lake marl deposits is due to the fact that Clairvaux is a small lake whose water level fluctuations are not very important, and that the archaeological site is not deep.
In this case, man himself gradualy brought most of the sediments here accumulated on a thickness of 1 / 2 meters. No continuous layer running throughout the site was observed.

The use of cofferdams

Sites located in bogs and swamps must be excavated with particular delicacy, for several reasons: the complexity of the stratigraphic sequences that are difficult to decipher for large areas, thick vegetation with deep roots, and sediment so porous that it barely manages to hold in the water table.

Excavations are thus carried out within a series of small cofferdams, 40 to 60 sq. meters each, from which water is pumped out. After the excavation, the challenge is to link up the data collected from each excavation unit, as there is substantial lateral sediment variability.

This technique of using cofferdams, each of which needs to be closed up again before the next one is opened, has been successfully tested on the shores of lakes when the water is not deep enough for scubadiving work.
The solution is to build a dam consisting of two parallel walls of planks, filled with fine lake marl and more or less watertight. The dam is built around the future excavation zone, which is then revealed when the water is pumped out. At Chalain, using cofferdams like this allowed archaeologists to explore, in dry conditions, areas of 200 sq. meters that had been under a meter of water when the lake level was at its lowest level.
The technique is labor-intensive and time-consuming to set up, but it allows for much better conditions than in an excavation by scubadivers. 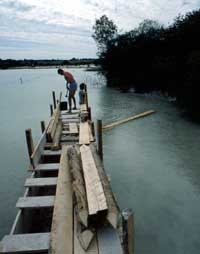 When the layers of sediment are clearly readable in stratigraphy—and this is often the case on the shores of large lakes—the top layers can be removed all at once over a 100-200 sq. meter surface area.

On these ancient shores, the difficulty lies in identifying the facies variations from shallow water out to the shores that emerge only during the dry season. In other words, as one moves from the lake towards the ancient shoreline, the layers tend to become thinner and more eroded. Great care must be taken when reading the sedimentary layers that are nearest to the lake, where the task of removing the layers must begin.

But apparently simple successions of sediment layers are rare and often deceiving, yielding a warped picture of ancient reality. Strata may have become simplified post facto, when man-made organic layers disappeared after a prolonged dry period. Alternating layers of habitation and abandon may in fact be only a sketchy palimpsest of a much more complex dynamic.

Of course, when removing a habitation layer in a wet environment, the ideal approach would be, as for any archaeological site, to not move the vestiges, and thus keep the possibility of visually examining the spatial relationships between the artifacts.

Studying skeletal connections, for example, is essential for understanding how animals were butchered, how meat was distributed, and how certain animals, whose skeletons are still articulated, were disposed of.

Sometimes, however, there are so many artifacts that archaeologists are obliged to emphasize certain vestiges over others.