During this experimental construction, we found that making a roof from thatch was the single biggest job of the reconstruction.

The study of vegetal remains shows that this reconstitution is not really plausible, no more than using reeds.

Current theories now favor the use of long plates of bark sewn directly onto the roof battens. The technical system based on the use of the linden tree was expanded further to include roofs for houses, and rain capes and hats for men. 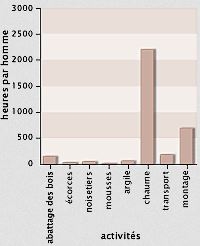