Bread appeared early in the Neolithic period, in the form of flattened cakes.

In lacustrine settings, it appears as early as the beginning of the 4th millenium, and fragments of carbonized bread have been found in several locations at Chalain and Clairvaux in settlements dating from the 31st century BCE. 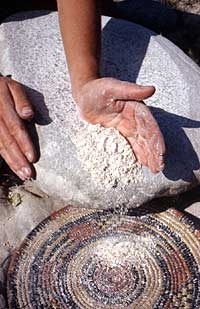 Cooking bread on a heated stone.