Itinerant agriculture and the plow stick

For a long time, cereal fiellds were located on cleared or burned lands: the top layer of soil was simply superficialy aerated using an angled plow stick. Here and there, the cleared field was dotted with stumps and dead trees too big to fell. After one or two harvests, the field was once again abandoned to the forest, and a new field had to be cleared. This is the technique known as itinerant agriculture. As soon as the fields were too far away, the villages had to be moved. Several decades later, if they returned, the forest would have grown back from stump shoots.

The swing-plough and a longer-lasting sedentarization

Around 3040 BCE, at a time when the villages had become far more permanent, the plow sticks had more or less completely vanished from Chalain. Other tools took their place, such as certain types of heavy mattock. It's possible that the first wooden ard ploughs appeared as well, at a time when using animals for hauling was being developed, with yokes and sledges used to transport heavy loads.

With the introduction of these new agricultural techniques, it was possible to clear a field of its old tree stumps and, as a consequence, seeds could be sown closer together. The tool most commonly used for harvesting was the flint knife, or sometimes simply a freshwater mussel shell. In reality, this knife was not made for severing the stalks of cereals at ground level, but for tearing the ears off and leaving the stalk in place.

Wheat and barley were also stored as complete ears in houses and granaries; in a damp environment, this is the best way to preserve their quality and germinating ability. 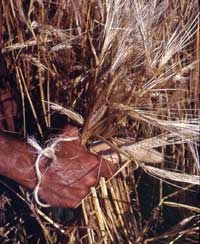 Technique for ripping ears from the stalk.