Neolithic building techniques are based on systematically fitting beams into the notched ends of posts and on lashing the various elements together with ropes.

The ropes were made from linden fiber, obtained by retting strips of bark collected in spring when the sap is running. The linden was an integral part of Neolithic technology: the same fibers were used to make clothing, mats and textiles, while the bark was also used to make stitched, cylindrical boxes and floor coverings. 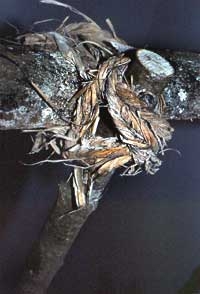 Rope made from linden fiber.

Stripping the bark from a linden tree.

Beams lashed together with linden rope.