History of the lake population

At Chalain and Clairvaux at the end of the 31st century, there was a very sharp increase in the number of contemporaneous villages, an increase that took place in less than twenty years.

The basis of this growth seems to be the arrival of new groups rather than the fertility of the local populations. In addition, the entire society underwent changes. In particular, more permanent villages began to be constructed using large pieces of oak, and these villages were occupied uninterruptedly for one or two generations. The population growth and the immediate shift in cultural and social concepts of communal life offer strong proof of these long-distance displacements.

As the climate degraded in the 29th century, the entire Chalain community seemed to collapse anew, even though the lakeshores were not completely abandoned. It is possible, however, that the situation is more complex than this, because the number of villages appears to decrease even before the climate began to worsen—as if the society itself was going through some sort of crisis. 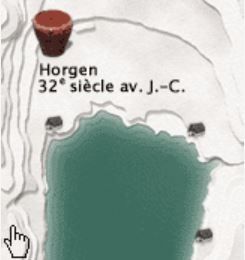 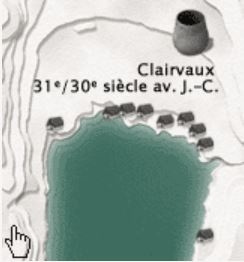 Villages at Chalain during the 32nd century BCE.

Villages at Chalain during the 31st/30th century BCE.