The future of the lakes

Even though it revealed the archaeological sites at Chalain, the abrupt drop in the level of Lake Chalain also was responsible for their partial destruction. Entire plates of the lake marl that held the vestiges collapsed and slip into deep water. In all, nearly 30 hectares were destroyed between 1904 and 1909.

Today, these plates lie 8 to 20 meters below the lake's low-water level, sometimes 200 meters from the present shore. 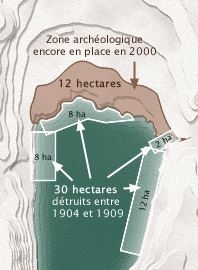 On shores made fragile by artificial variations in the water level of up to 8 meters a year, wave erosion has increased over nearly a century. This eats away at the shores and is causing a considerable portion of the Neolithic sites to disappear.

Dried and compacted layers of sediment

Until 1983, EDF kept the level of the lake low during the winter, in order to keep the lake's hydroelectric production as profitable as possible. These repeated artificial drops in the water level resulted in progressive draining of the water table, which in turn compacted the layers of sediment at the edge of the lake. These layers then subsided, sometimes up to 4 meters below their original level.

At Clairvaux, where the lake level fluctuates only by a meter, the entire archaeological zone north of the Great Lake is threatened by uncontrolled fill dumping. In addition, south of the lake, a number of artificial drains have been dug in an attempt to drain the marsh, to the detriment of the Neolithic sites.