The medieval town and its crafts

A 14th century workshop of a silversmith-enameller

A waste pit revealed scraps from the workshop of a silversmith-enameller from the first quarter of the fourteenth century. In particular, it contained fragments of glass blocks and glass nuclei, as well as salvaged pieces of glass (plate glass, mosaic fragments, etc.) in eleven distinct colors (white, red, purple, green and several shades of blue). When these were reduced to powder, they were the raw materials for enameling. Residues of silver, tin, lead and copper were detected in the two smallest of five ceramic crucibles. A translucent agate with rounded edges displays the characteristics of a burnisher.

In addition, seventeen rock crystal doublets were found, in both square and round shapes, each presenting one flat and one convex surface. Two were found with a binding material: an imitation of sapphire blue, it consisted of finely ground lapis lazuli and a plant-based glue. Finally, the pit also delivered up a late ninth- or tenth-century decorative border in cloisonné enamel. This appears to belong to a piece from the basilica's treasury, perhaps the gold antependium - offered by Charles the Bald (843-877) - that adorned the high altar. In the abbey's accounts, mention is often made of expenses for repairing liturgical objects; perhaps this border was lost during one such restoration. 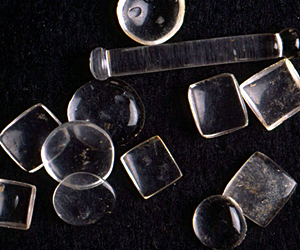 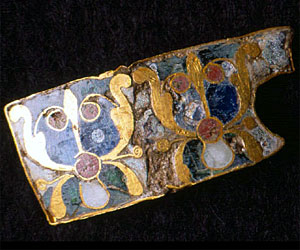