Our reconstruction of Fulrad basilica is mainly based on the archaeological work of S. Crosby and on Jacobsen and Wyss's recent reexamination of the vestiges that are still preserved in the current basilica's archaeological crypt. This was a entirely new church, whose layout was that of a basilica with three aisles, nine bays. in length. The central aisle, or nave, was separated from the two side aisles by two rows of columns, whose bases are preserved in situ. The structure had a simple ceiling, and its west end had a vestibule flanked by two towers. To the east, the nave gave onto a slightly projecting transept.
he semi-circular apse, which had pilasters on the outside, included an annular crypt, whose two corridors are still partially visible. At the entrance to these corridors were steps that gave access to the transept at right angles. According to the German archaeologist Uwe Lobbedey, these stairways may have been inset in two stairway towers set in the eastern corners of a probable crossing tower. A door that gave onto the cemetery was set in the exterior wall of the northern side aisle. We may assume that the southern aisle probably had a similar door that gave access to the monastery. The current Romanesque crypt, the so-called "Hilduin

chapel", ppears to retain the trace of an initial extension of the Carolingian chevet, which took the form of a chapel that in our Hypothetical reconstruction has an upper storey. The noticeable deviation of the chapel from the axis of the basilica cannot be attributed to any geographical constraint. Rather, it appears to conform to the alignment of the monastery as of the twelfth century. This indirectly proves the existence of Carolingian monastic structures of which no archaeological trace remains. This is why our Hypothetical reconstruction cannot pretend to be anything more than a suggestion.
The basilica coexists with the line of Merovingian-era churches and galleries. To the west of this complex, excavations have revealed a living area corresponding to a palace comprised of several stone residential buildings. Two of these structures, at the edge of the excavation zone, are too fragmentary to allow us to reconstruct their general appearance. A third, better preserved building was built as a prolongation of a church gallery. It appears to be divided into two parts; an oblong western part that is split up by dividing the walls, and a more elongated eastern half that is surrounded by annexes. A square annex at the southeast corner of this building that projects slightly outward may have been a staircase; the structure thus had at least one upper floor. The construction of this palace brought the monumental complex to the first apogee of its architectural development. 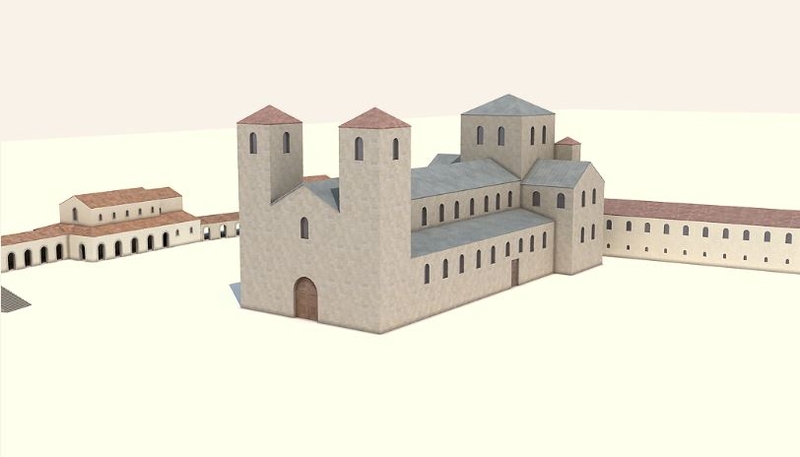 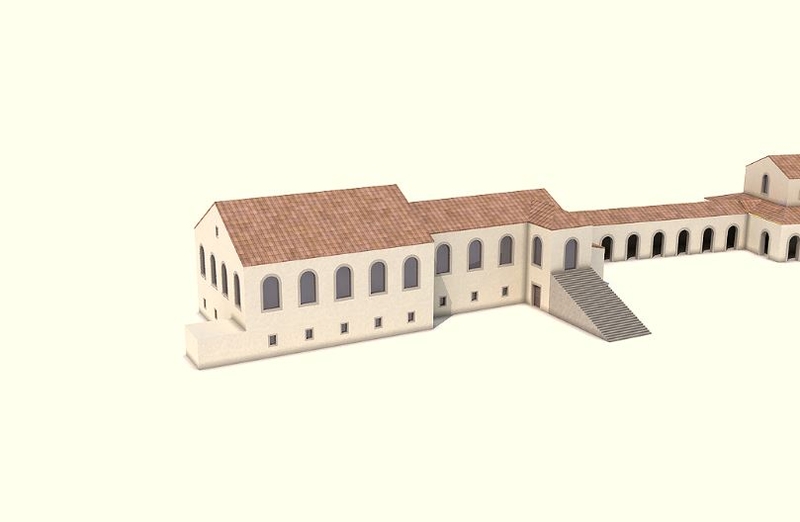 Hypothetical reconstruction of the Carolingian basilica, seen from the west.

Hypothetical reconstruction of the residential building that was an extension of the gallery of the Saint-Barthélemy church.