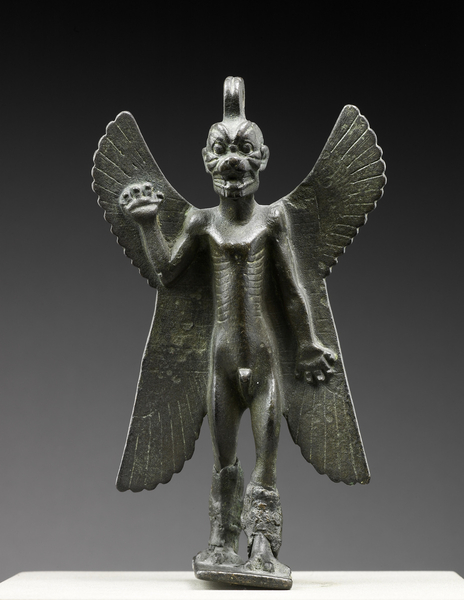 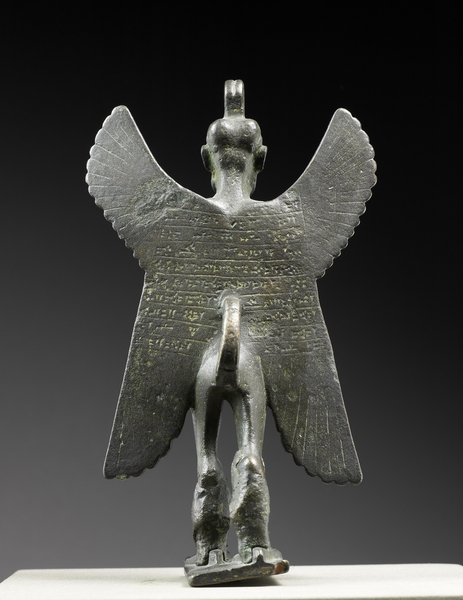 Bronze statuette of the demon Pazuzu with an upper hanging-ring.

An inscription on the back of the wings of the statuette of Pazuzu tells us the demon’s name and his role as protector.

The statuette of Pazuzu is from Assyria, but we do not know which archaeological site it came from. It was acquired in 1872 in Alexandria by Félix-Bienaimé Feuardent. It belonged to the former Demetrio collection and is now on display at the Musée du Louvre.

An evil or protective demon?

Pazuzu is an evil demon. A figure with a terrifying face and body, he emerges from the underworld to spread disease and epidemics on Earth, although he can also act as a protective spirit.

As king of the demons, he presides over their actions and has the power to prevent them from causing harm. In Assyria, people placed statuettes of him in their houses or wore Pazuzu heads as amulets so the devil would protect them from evil spirits. Pregnant women placed small heads of the demon Pazuzu around their necks to drive away the demon Lamashtu, killer of infants. This is why Pazuzu was very popular in Assyria in the 1st millennium BCE and why figurines bearing his effigy have been found in large numbers. These discoveries provide a better understanding of the beliefs and ritual practices of this period. The statuette in the Louvre features a particularly interesting inscription.