The town and the abbey

The natural setting: landscape and hydrographics

The ancient topography of the territory of Saint-Denis is located to the east of a vast and winding loop of the Seine. It consists of a plateau (La Plaine) that is intersected by paleochannels and peat marshes. The plateau is delimited to the south by the Butte Montmartre, and to the north it is crossed by the valley of the Rouillon, a tributary of the Seine. On the edges of this marshy zone, the landscape is principally formed by two elevations: the larger of the two has a north-south orientation and dominates the river's right bank. It forms a plateau along which ran the Estrée – the Roman road out of Paris that followed the Seine all the way to Rouen. The second elevation – where the basilica would be built – is a promontory that rises somewhat more to the east. Between these two elevations runs the gentle Montfort brook. 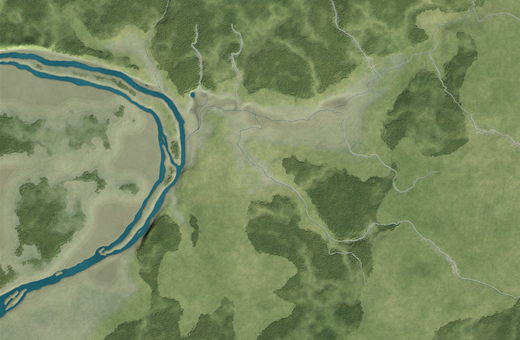 The calcareous soil was propitious for agriculture, while the sandy hills were covered with forest clumps. The geological layers beneath the soil contained gypsum, the "plaster stone", which was quarried from Antiquity all the way through to the nineteenth century. The quarries were found to the south, on the flanks of the Butte Montmartre, as well as to the north, dug into the Pinson hill. Freestone, cut from the large limestone deposits located near Carrières-sur-Seine (formerly Carrière Saint-Denis), was used widely throughout the Middle Ages in local construction; it was brought up the Seine by boat.

A towpath ran along the river's right bank. Written sources tell us that boats tied up either at the port of La Briche, below the mouth of the Rouillon, or upstream at Vieux Port and Port aux Poireaux. Between these two sites, shoals blocking the river's course extended from the Ile Saint-Denis to the Maison de Seine.

The first traces of human occupation date back to the Early Neolithic. Close to the basilica, a single grav, a few storage pits and flint knapping areas bear witness to rather sporadic occupation. La Plaine was perhaps the first zone to be cleared; the arrival of agriculture in this area is particularly well illustrated by the discovery of a hoard of quern-stones associated with ceramics. Several storage pits containing pottery attest to an Iron Age presence, and a rural establishment from the late La Tène surrounded by a ditch was discovered on the north flank of Rouillon valley.