A rural settlement from the late La Tène 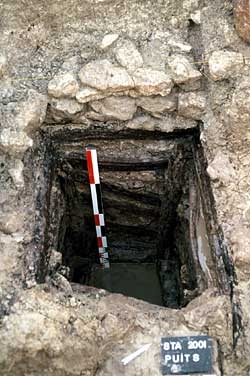 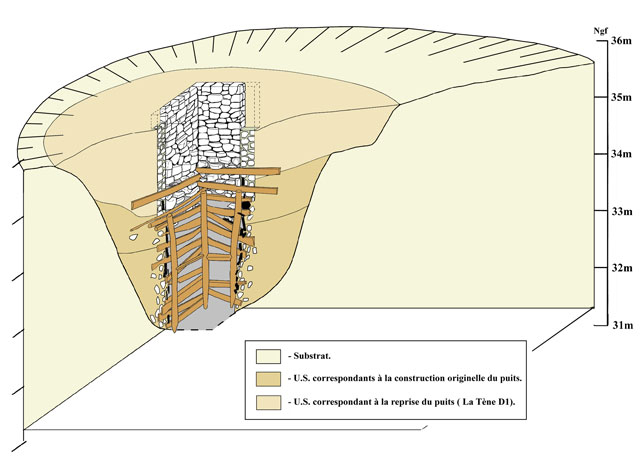 The extent of cereal-growing and cattle-breeding can be seen in the rural settlement that was discovered on the north slope of the Rouillon valley at the place known as "Haut du Tartre". The space allotted for habitation was delimited by an enclosure ditch. Four variously-sized structures built on posts may have served as living spaces, barns or granaries.

Water was provided by a five-meter-deep well made of wood and stone. The well casing was made of split oak planks stacked behind four corner posts, and held in at mid-height by struts. The well, which was fed by ground water, had been filled in with a water-logged sediment that contained large amounts of grain and plant remains. They indicate that the inhabitants ate barley, common millet and spelt. Flax was grown for pressing into oil or making into textiles. Several large bovid skulls and one goat skull indicate the presence of a herd; their presence in the well may be indication of a ritual gesture that is characteristic of religious practices in the Bronze and Iron ages.

Today, dendrochronology is an essential archaeological dating method. It is based on the study of tree rings, whose annual growth is determined by climatic conditions. A sequence of rings never repeats itself; by studying progressively older trees, a reference sequence may be established, to which the rings from samples of wood found during archaeological excavations may be compared. Dendrochronological analysis of the wood used in the well casing allows us to date the well to 150 BCE. Judging by the pottery and coins found in the enclosure's filled-in ditch, the site was abandoned a century later.