The reconstruction of the abbey's church mobilized a large and often diverse labour-force. According to the accounts of the abbey's commandery, stone and wood - the two main construction materials - were entrusted to master masons and master carpenters.

For the building of the abbey, the monks of Saint-Denis called up on the services of a dynasty of well-known master-builders: Pierre, Eudes and Raoul de Montreuil. These men assumed the roles of both architect and works coodinators. When we look at the technical complexity of Gothic constructions, we can easily see that the theoretical know-how of these master builders was based on a deep understanding of the laws of geometry and mathematics.

In practice however, the tools used by builders were relatively modest, like those found on the tombstone of the master Guérin in the Saint-Marcel church-plumb line, ruler, trowel and adze. To these we could add a measuring cord, compass, set square, and templates, used to shape stone in the workshop.

For assembling the pieces during construction, the account books for the year 1290-1291 mention a hoist on the vaults of the church, which may correspond to a capstan, or to a "squirrel cage" worked by men turning it from inside. 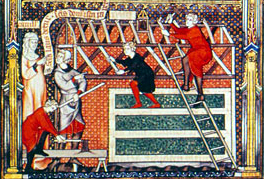 Drawing of the tombstone of master Guérin, buried in the Saint-Marcel church in Saint-Denis in the 13th century, drawing by François de Guilhermy, 1875.