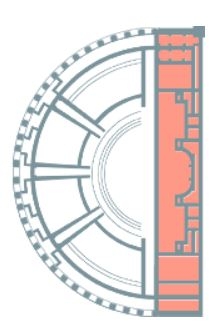 View of Lutetia's theatre, based on the proposals of Théodore Vacquer. Even though we know nothing about the stage front, we may imagine that it was richly decorated with superimposed columns and even statues.

Map of the stage.

We know nothing of the size of the stage nor what surrounded it. Nothing has survived of the front of the stage, the decoration or the doors by which the actors entered. Two parallel walls giving onto the decumanus of the Rue des Ecoles, may have formed the postscaenium. This element would have been quite narrow, and it was cut off-at least at either end-by two transversal walls.

At either end of the stage were two spaces that appear to have been part of the parascaenia and that had strong inner buttresses. These seem to indicate a multi-story construction, perhaps a portico. In the northern corners, solid, square foundations also testify to a high elevation.

These buttresses could have been added later, marking a second state of the theatre.