The basilica was located on the site of the present-day flower market, between the Rue de la Cité and the commercial law court. It was discovered when tunnels for the Metro were dug in 1906.

Like the "Palace", it was built with re-used stone blocks, many of them funerary in origin, including some of the most beautiful yet discovered. The basilica was rectangular in shape, 70 metres long and 35 metres wide, and consisted of a nave flanked by side aisles. It is very likely that the entrance was on the building's east side, giving onto the cardo maximus. 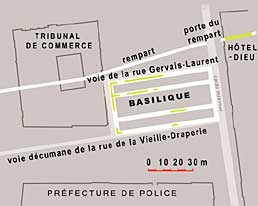 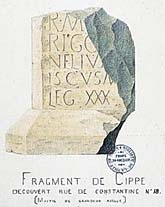 Fragment of the inscribed stele of Cornelius Crispus, a legionary. Foundations of the flower-market basilica, 1844.

Since we know nothing about the interior architecture of the basilica, it is difficult to state with confidence its original function. It does not appear to have been a religious building-unless we accept the unlikely idea that a place of worship constructed after the Peace of the Church could have completely vanished from the landscape and from human memory. It could be that the basilica was strictly a civil structure. The important role that Lutetia may have played in the 4th century-as the presence of the emperor attests-would explain its relatively large size.